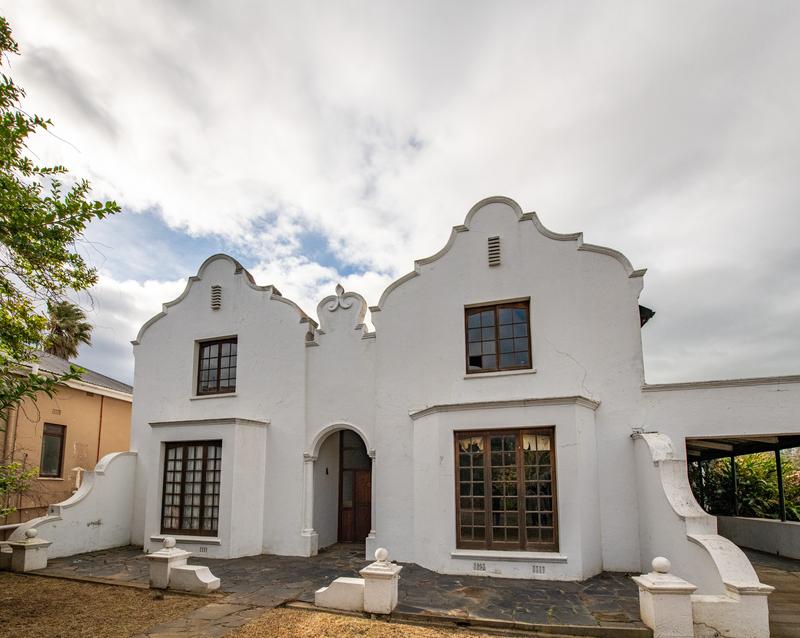 BE PART OF THE HISTORY OF CALEDON

Here is the transfer history of this property:

(One could say that his property survived the Ango-Boereoorlog, First World War, Second World War, Major changes in SA in 1994, etc.)

The original buildings on the then smallholding, was a dairy and shed. The 2 buildings were later joined and turned into a house as it is still is in 2019.
The house is situated in the front part of the very big 3117 m² stand. Back in the day the owner kept life stock on this piece of land. Near the end of the stand is a small water stream that flows down from the Caledon Botanical garden. Parallel to the stand, is a street “donated” by the current owner’s grandfather. The street makes it easy to subdivide the big stand into smaller stands and develop a few more properties. Each stand will have access from this street.
The Cape Dutch style house and the then beautiful gardens use to be one of the prime properties in Caledon and can be turned into that again. In 124 years, this property on had 2 families that owned it, your family can be the proud 3rd owner.
When you read the history of Caledon, below you will realise how this property forms part of it.

BACKGROUND OF CALEDON:
(Info from the Caledon Wikipedia website)

Caledon is a town in the Overberg region, only 100 km from Cape Town. It is situated next to mineral-rich hot springs. From Caledon you have easy access to Arniston, Greyton and Hermanus Caledon is primarily agricultural region and most agricultural activities involve grain production and certain amount of stock farming. The town is locally well known for the Caledon Spa and Casino and for its rolling hills and yellow canola fields in Springtime.
The town has Mediterranean climate of warm dry summers and cool wet winters. Temperatures are modified by its close proximity to the South Atlantic Ocean, just over the Klein River Mountains to the South.

Caledon was originally known in Dutch as Bad agter de Berg (Bath Behind the Mountain). A bath house was built in 1797 and a village called Swarberg sprang up, which was later renamed Caledon in honour of the Irish peer Du Pre Alexander, 2nd Earl of Caledon (1777-1839), the first British governor of Cape (1806-11)

The first land in die Caledon area was given to Ferdinandus Apple, on 10 March 1710. The first Church in the town, then called Swartberg was established on 13 December 1813.